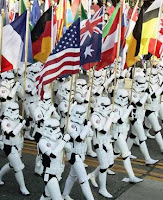 Readers may recall headlines in local newspapers at the beginning of the Star Wars trial (see IP Finance here) reporting that Lucasfilm Ltd, Star Wars Production Ltd and Lucasfilm Entertainment Co Ltd were, amongst other claims, trying to enforce a judgement obtained in the US against Ainsworth and Shepperton Design Studios Ltd for millions in damages. After 17 days of full trial, during which rights to replica Jedi knights, witches, and princesses were scrutinised, Judge Mann held on the issue of enforceability of the US Judgement, that the judgment of the US court was not enforceable against Ainsworth. The findings on the recovery of "multiple damages" are worth noting:

There were two asserted defences to the specific claim:

(a) That Mr Ainsworth did not submit to the jurisdiction of the US courts, and did not have a sufficient presence in the US, so as to enable Lucas to rely on the judgment in an English action.

(b) If he is liable to be sued on that judgment, the Lanham Act element ($5m of the $10m sued for) cannot be relied on because of the Protection of Trading Interests Act 1980 ("PTIA").

Albeit that Mann J upheld the first defence, he went on to consider Section 5 of the PTIA which limits the recovery of "multiple damages" (damages obtained by multiplying another sum) under Section 5. For the benefit of the reader the relevant part of the formal US judgment was in the following terms:

"1. On the First Claim for Relief for copyright infringement, actual damages and profits in the amount of $5,000,000.

3. On the Second and Third Claims for unfair competition and trademark infringement under the Lanham Act, an additional $10,000,000 to treble the compensatory damages awarded on those claims."

Mann J concluded, in what appears to be a first on this specific point (see para 226 and 228), that:

*genuinely compensatory elements of an award subject to multiplication should be recoverable. In this context the split of the actual judgment contained in paragraphs 2 and 3 acquires significance. It makes it plain that the relevant head of damages does have a compensatory element and identifies it. There is a real sense in which this part of the judgment contains two separate and severable elements – the compensatory and the punitive, or exaggerated (or whatever adjective one chooses to apply to the multiplied damages). The paragraph 2 damages are not barred by the Act; only the paragraph 3 damages are.

There was no dispute on the first head of damages.

For a worthwhile review of the entire decision see IPKAT post here.

For the wording of Section 5 PTIA see paragraph 225 of the Judgement.

Incidentally, "questions of relief [in this judgement] are due to be decided at a further hearing, for which directions can be given if necessary" - so we wait for another Star Wars episode, this time directed by the High Court it seems.
Posted by Darren Olivier at 08:20:00