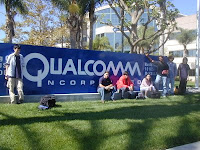 The story is a couple of weeks old, but may still be of interest. US chipmaker Applied Micro CIrcuits has sold some patents to telecommunications company Qualcomm for USD 33 Million. Qualcomm is, of course, known for its licensing programme in the GSM/3G. There was a time in which Qualcomm actually made read end consumer products, such as handsets. These days it makes chipsets for use in mobile communications and telecommunications.

Qualcomm has been involved in a number of bun fight with the big players in the telecommunications industry, such as Nokia (see report here ). It has not been part of any licensing pool and seems to prefer to negotiate its deals. Its business model seems to be based around licensing its own developed intellectual property together with purchased-in technology.
Posted by Unknown at 00:39:00