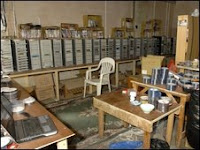 The BBC, among others, has given prominence to the conviction by Southwark Crown Court (South London) of a father and his sons who between them made £7 million from a pirate DVD scam. The father, Khalid Sheikh, who lived with his sons, was sentenced to four years in prison; the sons were not so lucky, Sami and Rafi each being jailed for six years. The convictions were for conspiring to infringe copyright and trade mark law and to acquire criminal property between 2003 and 2006.

Passing sentence, Judge Martin Beddoe said: "The evidence suggested tens of thousands of burnt counterfeit material was being produced each week in so-called factories [above, right]] where vulnerable immigrants from China were patently [sic] being exploited for substantial financial reward". During the trial the court heard the gang ran a "sophisticated" operation, importing equipment from the Far East to copy new film titles that included Ice Age 2, the Da Vinci Code and Iron Manm to the "best industry standards possible".

Operating fake DVD "factories" from various properties the Sheikhs, who mainly employed illegal Chinese immigrants, produced hundreds of thousands of DVDs which were then sold on the street for as little as £3 before they were released. The father and sons, who were in receipt of state benefits, also produced pornographic and bestiality films to such an extent some sex film shops were driven out of business.

The jury was told that, while their employees were forced to work "round-the-clock in conditions of virtual slavery", the gang took first-class flights on luxury holidays and spent money in lap-dancing clubs. They also bought a £658,000 warehouse in Essex and made it the headquarters of their operation.

Police believe most of the "vast" ill-gotten gains of the scam have been smuggled out of the country. However, regarding such assets as still may be recoverable, a confiscation hearing will take place at a later date.

IP Finance notes the vast scale of the operation. Whether the £7 million was gross rather than net profit, the number of DVDs selling at £3 per unit must have been extremely large. It is not surprising that some sex shops were put out of business; what is more surprising is that the operation did not make more ripples in the local market for DVDs. It would be interesting to know what proportion of the sales was accounted for by internet trade and what other commercial manifestations of the operation could be detected in the course of unlawful commercial activity which the police apparently investigated for three years. This blog hopes that further details of the family's financial arrangements will be made available, to give a valuable insight into the risk v profit calculations which the infringers must have made before opting to counterfeit DVDs rather than engage in any other lawful or unlawful activity.
Posted by Jeremy at 17:12:00