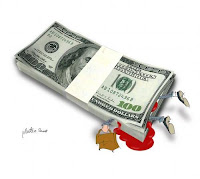 One of the issues I have busy with recently is the structuring of licensing relationships so that they comply with the fairly tight and controversial exchange control regulations imposed by the South African Reserve Bank. As usual there is the law, the practice and the people that require intense consideration - my experience is that each element needs to be considered carefully. For the benefit of readers:

The South African Exchange Control Regulations stipulate that the payment of royalties by a licensee residing in South Africa under an IP licence agreement to a non resident licensor requires exchange control approval from the South African Reserve Bank (SARB). If the terms of the IP licence provide that goods may be manufactured in RSA the SARB will look to the Department of Trade and Industry (DTI) for advice in assessing such approval. In reality this means that a typical licensee resident in RSA must submit an application to the DTI for its consideration. If the DTI approves the agreement, a Certificate of Approval will be issued to the licensee that will enable them to approach their banker directly and instruct the transfer of the royalties. Such a requirement may also be necessary where a licence covers RSA even though the licensee is based elsewhere eg the UK. Beware, licenses without exchange control approval may not be recognized by the RSA courts.

Where the licence agreement also contains clauses that stipulate down payments (eg Signature Fees), minimum payments (eg Minimum Guaranteed Royalties) and once off payments or to the extent the manufacture of products may take place offshore (to RSA), the DTI will make a recommendation to the SARB who would then consider whether or not to approve the payment(s). In practice though approval for agreements with these sorts of payments is often very difficult to obtain because the very nature of the clause may mean that it is possible for a situation to occur in which the flow of capital (in this case the royalty or down payment) out of RSA is greater than the value of the IP licensed into RSA. The very purpose of exchange control is therefore defeated. For similar reasons agreements that include Minimum Sales Targets or excessively high royalty rates (see below) are also often rejected.

Structuring to seek as few approvals as possible

In the event that approval is not granted reasons are provided by the DTI/SARB and one then has an opportunity to re-submit the application with the suggested amendments or otherwise contest the decision. If approval is granted such approval is for a maximum period of five years at a time whereupon the extension requests (up to a further five year period) would need to be made. It is obvious therefore that one should structure a licensing regime to as seek as few approvals as possible especially where multiple licensees are contemplated. Often this requires the establishment of a local business who acts as a master licensor who collects royalties and then makes one application to remit the payment or, where possible, pays out a dividend.

In all instances where a resident licensee enters into a new or a substitute agreement or the extension of an existing agreement with a non resident licensor they must submit an application. Applications are in the form of a completed questionnaire/explanation submitted in duplicate together with four copies of the draft/signed agreement and amendments/addendum, if applicable.

• Changes in the name of the licensee and/or licensor (submit the relevant "Certificate of change of name of company issued by the Registrar of Companies"); and

• Changes in the local bankers or branch with whom the SARB may communicate regarding the transfer of payments under the agreement.

The rationale behind exchange control is frequently the subject of heated debate and adding to the arguments for those that favour less/the abolition of control will be the time it takes to get approval. Despite the DTI promise of an assessment of the exchange control application within 10-14 days, most experience a two month waiting time for feedback from the SARB. In the context of the fast moving commercial world such a waiting time is ridiculously long. Take for instance a simple transaction involving the assignment of a trade mark to a non RSA resident – one needs to get a valuation (and incur the cost) and then wait for two months before approval is/is not granted. I have sat in meetings where local RSA IP advisors have simply said “do not transfer your IP assets to RSA because it is such a schlep if you ever want to get them back out” – a subject for another article perhaps!
Posted by Darren Olivier at 05:19:00