Disney goes for the high end 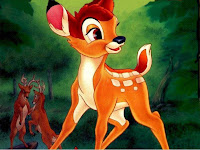 Thank you, Miri Frankel (Beanstalk), for this link to this piece in the New York Times last week on leverage of the Disney brand in terms of product merchandising.

Right: some consumers may now find Disney products a little 'deer' as compared with their former pricing

Remarkably, while the most expensive piece of clothing sold by the Walt Disney Company six years ago was a US$75 sweatshirt embossed with a mug shot of Mickey Mouse, the company now sells US$3,900 designer wedding gowns — which do not portray any Disney characters — as well as US$2,800 leather club chairs and US$6,000 chandeliers patterned after the Art Deco décor in Walt Disney’s former office. It seems that Disney has become a "lifestyle brand".

The article sets out Disney's high-end game plan. It has been working with the likes of Paul Smith, Vivienne Tam and Dolce & Gabbana, who created a US$1,400 sequined Mickey Mouse T-shirt. It concludes:

Designers say they have been impressed with the willingness of the famously guarded company to take chances. Charlotte Tarantola, a Los Angeles designer, said she decided to do a limited collection based on “Snow White and the Seven Dwarfs” in part because Disney allowed her to explore “the darker, very adult side of the fairy tale.” As the proprietor of a small company, Ms. Tarantola was eager to piggyback on the Disney name. “Anyone who is alive today has been touched by Disney in some way. If becoming partners with them can help my business, far out.”

Although this form of leverage has worked on the Disney brand, it may be difficult for other children's entertainment-based brands to do likewise. The consistency and stability of Disney's branding, across fictional and real characters, film products and leisure complexes, together with its remarkable longevity, have created an asset that is deeply embedded in the consciousness of a generation of consumers who wish to relive pleasurable childhood experiences and who fear the consequences of age and responsibility. How many equivalent brands have the same effect?
Posted by Jeremy at 05:51:00

And I was getting frustrated because I can't turn around in Nigeria without seeing Hannah Montana. Well, you have to admit, Disney knows what it's doing.