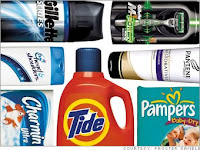 The New York Times reported last week that hip-hop and R&B producer Jermaine Dupri, who runs the urban music division of the Island Def Jam Music Group, is also looking for fresh talent for a new label financed by a company new to the music industry. The new player in question, surprisingly, is Procter & Gamble. According to this article, P&G

"... is part of a wave of companies getting into the music business to promote their own products, essentially becoming record labels themselves.

Procter & Gamble ... is joining Island Def Jam in a joint venture called Tag Records, a label that will sign and release albums by new hip-hop acts. It is named after a brand of body spray that P.& G. acquired when it bought Gillette.

... At a time when online file-sharing is rampant, record stores are closing and consumers are buying singles instead of albums, getting into the music business might seem like running into a burning building. But as record labels struggle to adjust to a harsh new digital reality, other companies are stepping up their involvement in music, going far beyond standard endorsement contracts and the use of songs in commercials.

These companies — like Procter & Gamble, Red Bull and Nike — are stepping outside of their core businesses to promote, finance and even distribute music themselves.

A few months ago, Bacardi announced that it would help the English electronic music duo Groove Armada pay for and promote its next release. Caress, the body-care line owned by Unilever, commissioned the Pussycat Dolls singer Nicole Scherzinger to record a version of Duran Duran’s “Rio” that it gave away on its Web site to promote its “Brazilian body wash” product. The energy drink company Red Bull is starting a label that is expected to release music before the end of the year.

And at least some of this music is credible: a hip-hop song that Nike released by Kanye West, Nas, Rakim and KRS-One was nominated for a Grammy Award for best rap performance by a duo or group.

Unlike Starbucks, which got into the music business to sell CDs at its stores, these companies want to use music to promote products they already sell.”

The article develops the theme, demonstrating a surprising twist in the tale of the search for viable business models for promoting and recording new musical works in the post-traditional copyright era. One might consider that this marks a return to patronage, but with the brand-rich IP portfolio owner replacing the church, state or nobility [Source: Miri Frankel, Beanstalk, NY].
Posted by Jeremy at 16:41:00