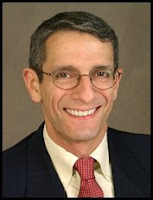 The excellent Intellectual Property Watch weblog carries a lengthy feature by Bennett Lincoff (right), "Inside Views: A New Business Model For The Music Industry Explained". This feature, which is itself based on a longer work (a 64 page article), succinctly describes the current problem facing the recording industry. Having outlined the status quo, Mr Lincoff proposes as follows:

"I suggest that lawmakers aggregate the rights of songwriters, music publishers, recording artists and record labels in their respective musical works and sound recordings and create a single right for digital transmissions of recorded music. The digital transmission right would replace the parties’ now-existing reproduction, public performance and distribution rights (and, where applicable, the communication and making available rights) for purposes of digital transmissions.

Going forward, the determinative consideration will be whether transmissions of recorded music have occurred, not whether transmissions result in sales, promote sales, or may cause sales to be lost. Licences will be made available without regard to whether recordings are streamed, downloaded, or transmitted by some means not yet devised; whether programming is interactive or non-interactive, or contains this, that or another recording; or whether the service that provides the transmission accepts user-generated content or operates as a P2P network. The number of copies made in the course of transmissions (including server copies, and ephemeral, transitory and buffer copies), the type of transmission technology used, and the file format in which recordings are transmitted will not be of concern.

Ownership of the digital transmission right in each recording will be held jointly by the songwriter(s), music publisher(s), recording artist(s) and record label who contribute to it. Each party will be a co-owner of the right in the recording in question. Moreover, regardless of the nature of their relationships to each other under pre-existing agreements, or to particular recordings under current law, under the digital transmission right each rights holder will have independent and sufficient authority to grant non-exclusive licences on any terms to which they and their licensees agree. The only limitation on this authority will be the obligation to account to co-owners for royalties earned.

Accordingly, consumers would not incur any liability to rights holders for accessing streams, downloading music, or making copies of recordings for personal use. Similarly, software distributors, technology firms, consumer electronics makers, and telecommunications and internet service providers, as such, would have no liability.

On the other hand, audio service providers will need licences if they operate websites or other services that provide digital transmissions, retransmissions or further transmissions of recorded music.

Whatever you may think of the author's proposals,

* it's great to say that someone with experience in the field in question is actually putting solid suggestions on the table rather than simply saying "the recording companies should stop harking back to the halcyon days when their old (pre-digital) business model worked and should design something else;

* it's notable that Mr Lincoff's proposals start with legislative reform as a sine qua non for the development of a new business model -- and this raises the question whether business models should shape the law or merely respond to it;

* given the nature of the distribution media, any solution will depend for its efficacy on the adoption of uniform legal provisions internationally. If there is no international norm, any business model will have to factor in the potentially devastating effect of havens in which the model becomes meaningless.

Based on the feature (I've yet to read the full paper), this sounds pie-in-the-sky, because it's vested in technological details, i.e. whether transmission occurs.

a) The lesser problem that digital transmission does not align with what we (today) perceive as being worthy of ownership. E.g. the transmission model would judge making a backup or media-shuffling (e.g. changing the songs on a limited, portable MP3 player from one's large, PC-based collection) to be worthy of remunerating a rights-holder. These are rights people expect to have today, and it might be a tough sell to persuade people to move to a model without these rights.

Further, there is no one-to-one correspondence between the performance/playing of digital media and transmission, because of hierarchical caching. Ordinary members of the public will perceive value as being in the performance of some media - not the transmission. I wonder how an ordinary person would react when, on some occassions they could play a downloaded work several times without extra charge (caching), on other times they would have to pay for each performance.

b) The greater problem that this model has no natural transaction point. In the sales based model, it was easy to levy royalties at a point of sale. In fact, so natural most people didn't notice. There were clear transactions, recorded in the accounts of retailers, from which to calculate the royalties.

In this transmission model however, there are no clear transaction points. Certainly none who are contractually obliged to keep account and report back to rights-holders. Instead, for this model to work, we will need to either rely on P2P nodes to honestly keep account of transmissions or alternatively we will need to legislate for some kind of mandatory digital controls (i.e. DRM) to be installed on all computers.

I.e. this proposal appears equivalent to DRM, and it has all the same weaknesses as DRM, and more.

(this comment also posted to the original feature at ip-watch.org)

To illustrate, here's another model, not based on dreams of a technological fix:

Recorded music becomes, more or less, free and to be essentially a promotional tool in marketing those services and physical goods which artists can reasonably restrict, ie:

I know, I know, it's flawed because it doesn't try to restrict the supply of digital media and so doesn't allow for money to be made from digital 'recordings' and so a lot of middle-men will have to find other work..

(Is the recording industry the modern equivalent of the coach builder?..)