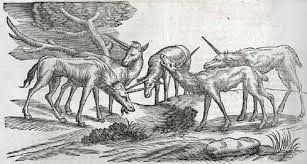 After all, valuations do not take the place of receipt of cold cash or its equivalent, which is the ultimate name of the game. Here, a unicorn valuation may actually work to the detriment of the company. This was pointed out in a recent Bloomberg interview with Alan Patricof, a well-known U.S. investor. He noted that since the IPO market remains tepid, a unicorn that wishes to cash out at this time will most likely have to find an acquisition partner. However, the larger a unicorn's valuation is, the more difficult it will be for the acquirer to come up with the necessary funding to consummate the transaction. As a result, more may paradoxically be less. Can it be that a unicorn may wait, hoping for the IPO market to awaken, or be forced to settle for an amount less than its valuation warrants? Whether the mythological unicorn has anything to offer its current manifestation in this respect remains to be seen.
Posted by Neil Wilkof at 19:00:00

The ratio of IP content to cash in hand in Unicorns varies considerably between sectors, and the distribution of IP rights across territorial markets is often very patchy. There has been some relevant writing on this topic on the Aistemos blog (see http://tinyurl.com/qjfvk3v) though it has tended to focus on patents to the exclusion of other IP rights.