When iconic may not be enough: the saga of FAO Schwarz 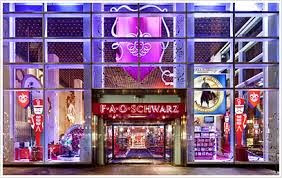 "Iconic".  The Merriam-Webster dictionary defines it, inter alia, as follows: a: widely recognized and well-established" such as "an iconic brand name", or" "b: widely known and acknowledged especially for distinctive excellence", such as an iconic writer", or "a region's iconic wines."

What happens when an iconic store name is intertwined with one of the most iconic scenes in all of moviedom? Surely this must be a sure-fire recipe for brand success. Sadly, however, even being iconic is not enough—just ask FAO Schwarz, which announced last Friday that it was vacating its famous toy store on Fifth Avenue in Manhattan for a presumed relocation to a less pricey site.

I don't think I am unusual in saying that, when I first visited New York more than 50 years ago, one of the top destinations was the FAO Schwarz store. My aunts made a bee-line for several near-by retailers offering clothing that they could never afford. For me, however, there were only three places in Manhattan that I wanted to see—the Empire State Building, the Stature of Liberty and FAO Schwarz. I don't know how I came to know the saga of the store, growing up as I did many hundreds of miles away in a small town in Ohio. But so I did, as did all of my friends. By the time that I made it to New York, I knew that there were all kinds of toys in the store that we could never afford. No matter—it was enough to be able to enter and look at them, secure in my belief that the sons and daughters of the famous and wealthy would provide the custom to support the store.

If that were not enough, the store was the setting for the unforgettable scene in the 1988 movie—Big, in which Tom Hanks joined the boss of the mythical toy store (having been filmed at FAO Schwarz, something that we all recognized), as they played a duet on a foot-operated electronic keyboard, performing "Heart and Soul" and "Chopsticks." If any US toy store was iconic, it was surely FAO Schwarz, where the movie scene merely validated what I had long-known as a child—FAO Schwarz was a toy store like no other.

It was against that backdrop that I was so taken aback by the Reuters report that the store was leaving Fifth Avenue due to the high rent being charged and the other costs of operating the store at the Fifth Avenue location .By July 15th, the company, which was acquired in 2009 by the much less up-scale toy company, Toys "R" Us, will take an early exit from its lease. The exact financial details were not disclosed, although the store did state that it was looking for a new Manhattan location. Previously gone were the FAO Schwarz locations in other cities. At the most, the store advised, in addition to the relocation of the Manhattan site, it will maintain an online presence as well as some boutique presence in various stores of its parent, Toys "R" Us. The next day, Saturday, the store was packed with shoppers, many not even aware of the announcement of the previous day. Typical was.Laurent Orne, visiting from France with his family. He took a number of pictures of his six-year old daughter, aside the well-known toy soldiers adorned in red uniforms, observing that "we wanted to come here because this store is mythical". Reflecting on all of this, it gives me pause to ask—what exactly is the value of such an "iconic", "mythical" name? True, the store is not apparently shutting its doors, but it is taking a step that will seemingly impair the aura of the name. Indeed, the question can be asked: is FAO Schwarz in the throes of a death-spiral, where the new store location struggles to find the combination of merchandise plus price points that will provide it with sufficient revenues? Will the typical customer in a Toys "R" Us store seriously consider paying the higher price tag of the boutique FAO Schwarz merchandise? However one looks at it, it seems to me that the brand is a fight for its long-term survival, no matter how iconic it is as part of American culture.
Posted by Neil Wilkof at 07:57:00