Priceline founder wants to shake up approach to patents 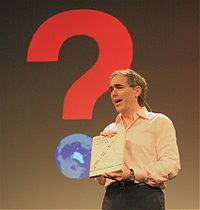 The US-based Washington Post included an article on Jay Walker's ideas to shake up America's approach to patents. For those of you unfamiliar with Jay Walker - he is the founder of Priceline.com and also holds an impressive portfolio of e-commerce patents. Any company active in the e-commerce space, at least in the United States, is likely to receive an invitation to licence the portfolio from Walker Digital and has a number of patent infringement suits pending against major companies.

Jay's idea is basically to set up a "utility" to act as a neutral party between both inventors of technology and potential licences. This does not seem to be particularly new, as a number of companies have tried this business model over the years and - to this author's knowledge - none has ever really succeeded in having a major success. More interesting is the proposal to be able to take a company's sales literature and run it agains the patent database to identify "adjacencies, opportunities, inventors and solutions". This approach is apparently involves using Big Data algorithms. Certainly the approach has worked for this author several times - he's identified licensing opportunities by searching patent databases to identify potential synergies. However, it's been a slog by a mixture of keyword search and patent classification tools. Anything to simplify the process would make things a lot easier. There does seem to be a lot of unused technology/patents out there, but reality is that most companies do not have or wish to invest resources in exploiting their otherwise unused technologies. There are simply too many other opportunities on which their employees can work and so hunting for potential licensees rarely takes any priority - although there are some companies that have now set up special licensing units to carry out this work which are staffed by dedicated employees, as well as brokers who can help broker a deal.

Ultimately any tool - such as Patent Properties (website here) that can lower the transaction costs involved in licensing technology and encouraging its exploitation can only be welcomed. It will be interesting to see whether the proposal is as good as promised on the Washington Post or merely another failed attempt to develop the potential interesting technology licensing market.
Posted by Unknown at 21:23:00