While the world’s eyes are on the World Cup in South Africa, I will focus this post on a country that is notably, and unfortunately, absent from the field of play – Ireland. Please don’t hold it against me that I’m a supporter of Arsenal, the team on which Thierry Henry played for eight years.

Patent income received by Irish residents (corporate or individual) is exempt from tax, up to €5 million per year. The exemption is limited to income received from patents that were developed and registered either in Ireland or the European Economic Area at large – as long as the income is received by an Irish resident. IP Finance previously reported on the Irish tax exemption here, here and here. 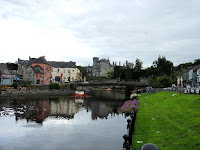 Ireland’s Patent Office is located in the city of Kilkenny, in County Kilkenny. In southeast Ireland, Kilkenny is quite a small city, with a population of about 22,000. Though small, Kilkenny boasts a variety of castles, historic buildings, art galleries, crafts workshops, theaters, public gardens and museums. If you find yourself in Kilkenny in August, you’ll be able to partake in the annual Kilkenny Art Festival.

This being Ireland, let’s start with where to drink and then sort out where to sleep. The cleverly named Anna Conda, on Parliament Street, is a beer garden and pub with live music on Saturday nights. Anna Conda also has “trad sessions” on Tuesdays, Fridays and Sundays. Not sure what trad sessions are? Neither am I. But they sound like what we call “jam sessions” in the US, where local musicians gather to play together, following each others’ leads. The Pumphouse, also on Parliament Street, has live music, traditional fare, pool tables, dart boards, and a beer garden. It is also promotes itself as stag- and hen-party friendly; if you like mixing business with pleasure, you can handle your patent work and your pre-nuptial events in one location.

Langston’s House Hotel features everything under one roof – executive guest rooms and suites, tea and wine rooms, meeting rooms and a bar. Having opened in 1324, there is plenty of history at Kyteler’s Inn & Medieval Tavern – not least of which is the story of its initial owner, Dame Alice Ie Kyteler. Dame Alice amassed a fortune from the four husbands she married in her lifetime. Though she was eventually accused of witchcraft and burned at the stake, she achieved success in building an inn that had a reputation as "a place of merrymaking and good cheer". Its reputation still precedes it, so join in the merrymaking whether you choose to book a room or merely stop in for a drink.

Finally, if you pass through Dublin on your way to or from Kilkenny, your trip would not be complete without a stop at the Guinness Storehouse, the Jameson Irish Whiskey Distillery, or The Brazen Head, Ireland’s oldest pub (est. 1198) and the place where Jameson himself apparently conducted “market research” while developing his famous triple-distilled whiskeys. For a less potent beverage in Dublin, Bewley’s Grafton Street Café roasts and serves the best coffee in Ireland at its café filled with Harry Clarke stained glass windows, original artwork, historical artifacts, hand-painted wallpaper, and theater that hosts weekly events. Bewley’s seems to hold Irish and UK trademarks for its coffee’s aroma; if you have further details about Bewley’s use of this mark, please let us know by leaving a comment.

Enjoy your trip to Ireland… Cheers!
Posted by Miri Frankel at 15:19:00