Recently I came across an excellent article written by Mike Du Toit of South African law firm Edward Nathan Sonnenberg on “Ambush Marketing”. As the World Cup in his home country approaches, the moment is indeed well-chosen to focus on this topic, which raises many interesting economic and legal issues.
Briefly, “ambush marketing” refers to all strategies used by companies to promote their brand during large-scale events (usually sporting events) without paying an expensive fee (the 2006 FIFA World Cup fifteen official Partners paid around €40 million each according to the Daily Telegraph) for the status of “official sponsor” and for the bundle of rights and commercial privileges that goes with it. Perhaps the most interesting feature of “Ambush Marketing”, and certainly the most frustrating one for 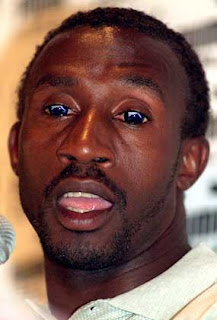 official sponsors and for the organizational committees in charge, is that such marketing stratagems have been conceived to have a strong impact in the media while remaining fully compliant with all applicable legislation. Nike holds the reputation of ambush marketing mastermind, because its marketing teams always find original ways to fully profit from the popularity of a major event while pushing its rivals back into the shadows (Puma knows a little bit about ambush marketing too ... Ask Lindford Christie!).
Right: Lindford Christie ...
In their quest for sponsors, event-organising committees or sports federations such as the ICO or the FIFA are faced with the so-called free-rider problem. It is not possible to prevent companies from advertising during the event on the basis that they are not officially affiliated with it, unless what they do is against the law. Moreover there are many other ways to advertise a company rather than paying the requested sponsorship fee. By being the official sponsor of a popular sportsman for example, a company can also enjoy a high level of visibility nonetheless. To overcome this free-rider problem, committees must make sure that they use all the legal means at their disposal to prevent ambush marketing, while offering a maximum of visibility to officially affiliated partners.
As Du Toit suggests, the legal means to prevent ambush marketing are relatively limited notably in the area of trademark law, as the measures taken for the forthcoming World Cup demonstrate. The World Cup has been designated as a “protected event” in terms of section 15A of the Merchandise Marks Act 1941.
In a notice published on 17 November 2005 in Government Gazette no 28243). The FIFA prohibited “the use of 2010 or Twenty Ten used with the words soccer, football, South Africa, RSA, SA, World Cup or with soccer or FIFA World Cup imagery under the terms of Trade Marks Act No. 194 of 1993, because its use implies an association with the World Cup. Likewise the expression World Cup cannot be used with the words “soccer”, “football”, South Africa, RSA, SA or soccer imagery ”. However the use of general football terms and imagery for the promotion of a company cannot be prohibited. Moreover the FIFA publishes guidelines to illustrate instances of unauthorized commercial association with the forthcoming world cup, whose deterrent effect is questionable, since it informs potential ambushers more than it probably should. Given this thin layer of protection, which is probably one of the most comprehensive ever awarded to official sponsors of an international sporting event, it is quite remarkable that so few large-scale ambush marketing campaigns have taken place in the past.
Below: ... and what can you see in his eye! 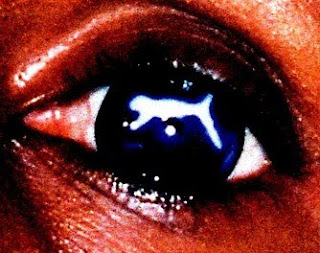 Nevertheless committees and federations have been learning from their previous mistakes. Therefore in order to face this lack of legal protection that could compromise the stability of this fragile sponsorship system and avoid successful ambush marketing, they created a safety net protecting the interest of official sponsors through a systematic use of contractual means. To that extent once being awarded the 2012 Olympic Games, London has been immediately required to sign the “Host City Contract”, which oblige them to respect all commitments made in the bidding process including the protection for the official sponsors. As a result the London Olympic and Paralympic Games Act 2006 entered into force with specific chapters concerning advertising and trading. Likewise for the World Cup, every host city has been required to sign similar “host city agreements” with the FIFA.
It is probably too soon to say if such measures will be sufficient to thwart the underhand ambushing plans of renowned “rogue” companies like Nike, Pepsi or Mastercard during the immanent World Cup and the next Olympic games. Let’s be patient and, to quote Du Toit, let the games begin.
Posted by Grégoire Marino at 00:02:00