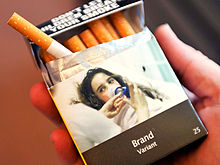 The issue of plain packaging for tobacco is a controversial one, which not only has the obvious public health issues, but an additional dimension relating to the value of intellectual property rights. If a company cannot use its trade mark to promote its product, then what value does that brand actually have? It's a discussion that has blown up several times at the World Trade Organisation Council and the WIPO magazine reported on the dismissal by the High Court of Australia of the challenge by several tobacco companies to Australia's law introduced in 2012.

Philip Morris International's Asian operation, based in Hong Kong, has challenged the law at the Permanent Court of Arbitration under the Australia  / Hong Kong Agreement for the Promotion and Protection of Investment. PML Asia argued through their Australian counsel that Australia's plain packaging legislation virtually "eliminate Philip Morris branded business by expropriating its valuable intellectual property". The brief continues that "... the plain packaging legislation bars the use of IP on tobacco products and packaging, transforming PML form a manufacturer of branded products to a manufacturer of commoditised products with the
consequential effect of substantially diminishing the value of PM Asia's investments in Australia". Essentially the argument is that by requiring companies to use plain packages in Australia, the value of the trade mark is substantially diminished, although it's unlikely to be "billions" as a report in the popular UK newspaper, the Daily Mail, reported. Australis Government's Attorney General has an informative website about the case setting out the government's case here.

The claim was dismissed on 17 December 2015 on procedural grounds. The Court of Arbitration concluded apparently that it did not have jurisdiction to hear the case. The full decision has not yet appeared on the website as it is apparently being redacted to remove confidential information. Philip Morris predictably issued a press release noting that the case was dismissed on procedural grounds and noted that there was nothing ... that address let alone validates plain packing in Australia or elsewhere".

Other challenges to Australia's law are still ongoing. Ukraine has challenged the law at the World Trade Organisation, but that dispute has been suspended to try and reach a mutually acceptable solution.

The decision to dismiss Philip Morris' case against Australia may have been done on procedural grounds - and it will be interesting to read the decision when it is published (can anyone send us a copy?), but already other countries are looking at compelling plain packaging for tobacco products and are apparently encouraged by the decision.

Which brings us back to the fundamental question: what rights do IP holders actually have if they can no longer use their registered trade marks on their products. Is this a destruction of "brand value" by government action, which could and should trigger compensation claims? As a non-smoker, this blogger is more than happy with the decline of smoking. As a trade mark lawyer and IP consultant he is concerned about the implications of the decision. It's established law in many countries that a government may only take private property into public use if a compensation is paid ("eminent domain" in the US; "compulsory purchase" in the UK and Australia; "Enteignung" in Germany). The existing laws are generally based on the idea of expropriating physical property - can they (or should they?) be adapted to take into account government restrictions on the use of a registered trade mark.
Posted by Unknown at 21:30:00

Philip Morris is not being deprived of its trademark. It is free to use it to sell products that do not kill its users.