Damages for passing off and interfering with website: some calculations laid bare

Harman v Burge [2014] EWHC 2836 (IPEC) is a 29 July 2014 decision from Judge Richard Hacon in the Intellectual Property Enterprise Court for England and Wales that throws further light on how to set about an inquiry into damages following the successful conclusion of an action for passing off and unlawful interference in trade.

Harman sued following interference by Burge with a website, http://www.doonevalleyholidays.co.uk (since shifted to http://www.exmoorcoastholidays.co.uk/), which fronted a holiday business that he had initially bought from Burge. The court awarded Harman damages for lost profits -- but how were they to be calculated? The judge's 68-paragraph judgment reduced the sum awarded by taking into account the fact that Harman had twice relocated his business after the infringing acts and that he had also discontinued a Google AdWords campaign which had been designed to recover the profile of the website, suggesting that there was no need for the campaign after the disruption to the website had been reduced. The court however also awarded Harman the cost of mitigating the damages he suffered, including the cost of Harman's AdWords campaign and the fees which he paid to an IT consultant in order to regain control of the website. The initial calculation relating to Harman's damages claim of £122,562, reproduced above, was compiled by Thayne Forbes (chartered accountant and director/co-founder of Intangible Business Limited), whom the judge found to be "a witness doing his best to assist the court. His evidence was a mixture of careful detail and quite significant assumptions, but [he] freely acknowledged where he had made those assumptions".

Following the court's analysis, it was whittled down to a more modest but presumably still rewarding £39,701. 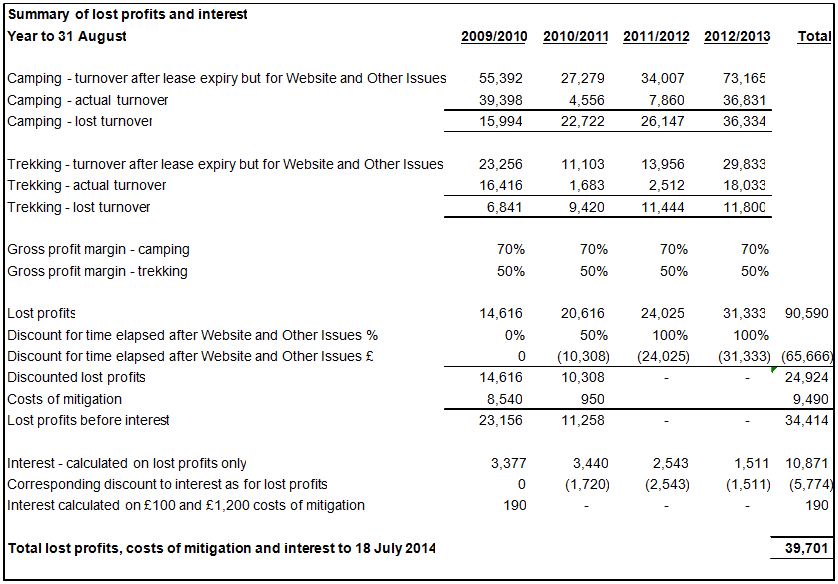 On the plus side, it's good to see a junior court such as IPEC get to grips with the financial issues and deal with them so efficiently.  On the down side, it's sad that this order was made more than two years after a consent order of June 2012 disposed of the issue of liability, and that it took two days of hearings to get through the issues raised here -- a long time in relation to the tightly-timetabled court.
Posted by Jeremy at 10:12:00

Email ThisBlogThis!Share to TwitterShare to FacebookShare to Pinterest
Labels: assessment of damages, cost of mitigation, IPEC