The advertisement below arrived in my email inbox earlier today.  Reading it, I found myself pondering over the apparently unstoppable one-way flow of movies from the United States to Europe. We have heard much discussion in recent times about the incentives which copyright provides in order to safeguard the investment which is incurred in the production of relatively high-cost products.  If such an incentive exists, what are the factors that cause investment to be made so much more successfully in US-made movies than in European ones?  European copyright law is surely no weaker than its American counterpart in all relevant respects and there is now a supposedly single market for cultural products within the EU, which has a population of around twice the size of that of the US.

So what is the reason why Europe buys US films but gets so few of its own distributed across the Pond? 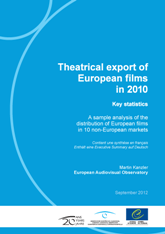 Theatrical export of European Films in 2010

Key points:
More detailed information on the content on our website!
‘Theatrical Export of European Films in 2010’ is available as a hard copy and pdf-version.

Email ThisBlogThis!Share to TwitterShare to FacebookShare to Pinterest
Labels: distribution of EU films in non-EU markets