Patent licensing remains a flashpoint for mobile telecom as it moves towards a future of 5G and the Internet of Things (IoT)
Cellular technology pioneers are being marginalized with diminished financial returns on their research and development investments while leaders in devices and “over-the-top” services are flourishing. Calls to weaken the basis of licensing standard-essential technologies are misplaced. There are no indications of profiteering or harm caused by licensors. All evidence is to the contrary. 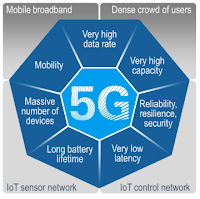 Innovations in standards including technologies based on standard-essential patents can be exploited in product and service implementations by anyone. Undermining the value of SEPs will choke off vital R&D investments along the path to “5G” and cause other harmful disruptions to the mobile ecosystem, including reduced contributions to or withdrawals from standard setting.
The innovation game

As I noted here a couple of months ago in a cellular industry trade publication I also write for, innovation in cellular and other supporting technologies as well as in applications will be able to sustain the rate of smartphone improvements. New technologies can also advance the “internet of things,” automotive and other capabilities. And the financial rewards could be substantial. A European Commission study has identified a potential annual benefit to its member states of 113 billion euro ($124 billion) annually as early as 2025, from deploying 5G, with trickle-down benefits from 5G investment totaling as much as 141 billion euro.

However, technology developments and infrastructure demand large investments globally. According to a study report on the “mobile revolution,” by the Boston Consulting Group in 2015, “to reap the economic benefit of [5G] networks and beyond, mobile players will need to invest approximately $4 trillion in R&D and capital expenditures by 2020.” BCG estimates mobile players invested an aggregate of $1.8 trillion in capex and R&D from 2009 through 2013, and are expected to invest approximately $4 trillion between 2014 and 2020. While the bulk of this is capex by mobile operators, BCG also estimates R&D technologies continue to accelerate, reaching almost $100 billion annually, and growing at a rate of 9% year-over-year since 2009.

R&D investments by their very nature can be very risky: consequently, these rely on the possibility that adequate revenues might be earned to compensate for these risks and the long time it takes to generate these revenues. With short device lifecycles, returns on product R&D are relatively quick and can be reasonably certain for market leaders with new models annually in popular lines such as iPhone and Galaxy, notwithstanding the occasional disaster like the incendiary Galaxy Note 7. Returns are significantly slower and less certain in network equipment product developments, for example, with big bets on once-per-decade generational changes including GSM, WCDMA/HSPA, LTE and upcoming 5G.

In the case of the fundamental technologies that contribute to these standards, lead times before any revenues can be generated are even longer and risks are much greater. For example, less than 17% of contributions to Third Generation Partnership Project standards have been approved for inclusion in the standards. Many contributions are based on and preceded by many years of R&D by individual companies before a technology is presented to any standard-setting organization working group. Nevertheless, for those technologies that are adopted the entire ecosystem including chip, device and network equipment manufacturers, as well as network operators and OTT service providers benefit from improved capabilities. In cellular, these have included thousand-fold increases in data rates over little more than a decade, much reduced latencies, higher network availability, high-definition voice, plunging costs per gigabyte for operators and users, and so on.
Ecosystem disruptions

However, there is significant and increasing divergence between those who have largely borne the costs of developing the standard-essential technologies and those who benefit most financially from exploiting them. Whereas most of the developers of the standard-essential technology employed by all implementers used to be vertically integrated with mobile phone manufacturing, those companies including Qualcomm (2000), Alcatel (2005), Siemens (2005), Motorola (2012), Ericsson (2011) and Nokia (2014) have sold off their handset businesses. The sellers, including those that have merged, have continued with sales of network equipment or chips and patent licensing. Handset brand names Motorola and Alcatel have lived on under licensing arrangements with Lenovo and TCL, respectively.

And many new entrants have appeared.

Meanwhile, the mobile devices market has expanded enormously along with demand growth for data services. These are the largest money makers in the mobile ecosystem, while use of OTT services including Facebook, YouTube and Netflix has surged on mobile devices, and as mobile advertising revenues have grown to nearly half of total internet advertising revenues.
Collecting the rents

Revenues and profits in smartphones are much larger than those generated by the leading five cellular SEP licensors that derive most of their revenues from sales of network equipment or chips. The difference is widening with a lackluster market in network equipment as LTE orders taper off. For example, Ericsson recently issued a profit warning and its interim CEO Jan Frykhammar forecast the total mobile infrastructure (RAN) market is set to fall by between 10% and 15% this year, and by between 2% and 6% in 2017.

Economic rents, which are profits exceeding the cost of capital, are increasingly accruing to leading device OEMs and OTT service providers in the mobile ecosystem. Largely from exceptional commercial success with dominance in mobile, Apple with iPhone and Alphabet with Google’s Android have become the world’s two most valuable companies. Sales of iPhones accounted for 60% of Apple’s revenues last quarter. Its service revenues in mobile are in addition. A news release reporting Apple’s fiscal fourth quarter earnings quoted its CEO, Tim Cook, as saying “we’re thrilled with … the incredible momentum of our Services business, where revenue grew 24% to set another all-time record.” Apple’s services revenues (including Apple Pay, Apple Music, iTunes and its App Store) generated $24 billion revenues in the year to September 2016. This substantially exceeds all cellular SEP licensing fees paid, as indicated in the next section, even though Apple’s user base from which it derives these revenues is only around 1 billion devices, in comparison to 7 billion cellular devices connected worldwide. With Android in 80% of smartphones, Google also profits most significantly from mobile, also including apps, search and advertising. On a conference call with investors this summer, Google CEO Sundar Pichai said “mobile is the engine that drives us.”

Paying their dues
Companies that develop SEP technologies are highly dependent on licensing revenues as well as their sales of network equipment or chips. SEP licensing brings compensation from those who implement the standard-essential technologies in their products to those who develop those technologies. The widening disparity in revenues and profits between the smartphone device market and those who significantly rely on cellular SEP licensing revenues limits the ability of the latter to invest in technology development for standardization and implementation ahead of the anticipated 5G launches from around 2020.

Cellular SEP licensing revenues at no more than around $20 billion are modest in comparison to and are being significantly outpaced by growth in other ecosystem revenues and costs. There are around $1 trillion dollars in operator service revenues. Total handset revenues have increased from $378 billion in 2013, to $439 billion in 2015, according to IDC.

The five leading mobile SEP licensors that contributed around half the patents declared essential to 3GPP standards collectively generated approximately $11 billion per annum in licensing fees between 2013 and 2015. This accounts for more than half the $20 total billion (at most) paid to all licensors. Licensing fees have declined slightly as a percentage of handset revenues.

Despite the stellar financial performance of the leading device OEMs and OTT players, there is mounting pressure to change consensus-based and established SEP-licensing practices, including by government intervention, which would further undermine the ability of cellular technology vendors to make an adequate return on their standard-essential technology investments through licensing. Measures such as making injunctions more difficult to obtain, enforcing licensing or calculating royalties at the chip level, as advocated by the so-called Fair Standards Alliance and as already implemented in the Institute of Electrical and Electronics Engineers new patent policy are all undermining SEP technology developers. Some antitrust authorities, including the U.S. Department of Justice, support such changes.

R&D investments and contributions to SSOs will be significantly reduced by measures to weaken SEP licensing. For example, proprietary and 3GPP-based technologies are vying with those based on IEEE standards for short-range communications in emerging next-generation IoT and automotive vehicle-to-x applications. Technology developers will shy away from participating in standard setting or investing at all where they cannot make sufficient returns on their investments.

The system of Fair Reasonable and Non-Discriminatory licensing in standard setting has worked extremely well with phenomenal innovation, extensive new market entry and significantly improving quality adjusted prices. There is no evidence of harm to competition or consumers. In the absence of that there is no basis to undermine the position of licensors in FRAND licensing, and particularly no justification for government agency interventions to force such change.

I originally published this article, here, in cellular industry trade publication RCR Wireless on November 16, 2016.
Posted by Keith Mallinson at 11:40:00