Over the years Chicago-based Ocean Tomo have calculated the value of intangible assets held by S&P 500 companies. Their latest report has been published today and it shows that on 1 January 2015 the percentage of the value of a company’s intangible assets grew to a massive 84% of the company’s value. That’s a rise of 4% since 2005, but more interestingly up from 17% in 1975. 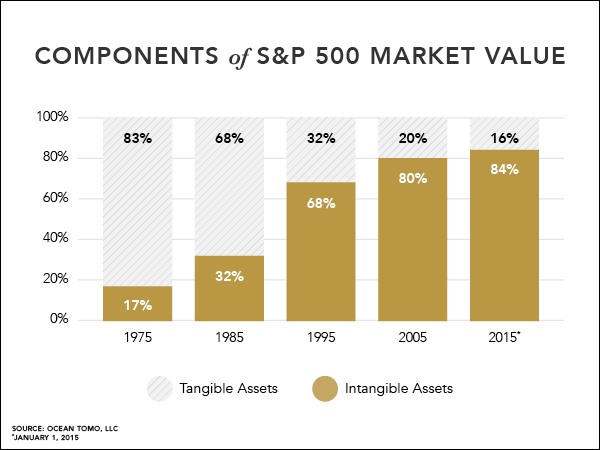 Ocean Tomo’s CEO Jim Malackowski is sceptical that there is going to be any more rise. He suggests that the America Invents Act combined with economic change suggests that there may be a re-balancing back towards tangible assets in the coming decade. He’s probably right - outsourcing to China is reducing and some American companies are reopening or building new production facities. That will add to the value of the tangible assets. However, it’s not clear that those will actually appear on the books of manufacturing companies, since many facilities are built and leased by other companies.

On the other hand, there is probably a limit to „virtualization“ of assets. All companies have some tangible assets - for manufacturing companies this will often be items of stock. In other companies it may be some of the IT assets. Jim is probably right. We may have reached the feasible limit. Nonetheless the figures show the dramatic impact that intangibles have had on the US economy (and probably in most of the world).

Anecdotal evidence suggests that many boards have failed to appreciate this point and will still spend a great deal of time discussing their physical assets and too little their intangible assets, such as personnel, innovation and intellectual property.