"A Great Story about Patent Trolls or How to Make an Offer You Can't Refuse": It's Not What You Think 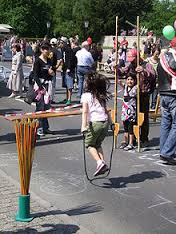 Thanks to fellow blogger Mike for bringing to the attention of our readers the article by David Segal, "How a Typical Patent Battle Took an Unexpected Turn", which appeared in the 13 July 13 issue of the New York Times, here. The article recounts the tale of a Chicago entrepreneur, Peter Braxton, whose app, "Jump Rope", which enables users to pay a fee to jump to the head of a queue, fell afoul of a law suit filed by an arguable patent troll, Smart Options. Braxton prevailed in the action (at summary judgment no less), but he was then threatened with an appeal and the filing of another first-instance patent infringement suit. Braxton, facing financial ruin even as he was prevailing at the legal level, ultimately joined forces with the (for some) notorious patent troll Erich Spangenberg and his company, IPNav. The upshot was that patent troll IPNav became a form of venture capitalist, putting in $200,000 in capital, and agreeing to handle Braxton's legal issues with Smart Options, in exchange for a 40% equity stake in company.

For Segal, the black and white hues of the actors seem pretty clear, as he concludes his piece with following observation: "…Peter Braxton's story suggests that there is really only one way to deal with a patent bully: team up with a bigger bully." While this summary makes for a good sound bite as the sardonic dénouement of a morality play, I think it does a bit of a disservice to the more nuanced context in which patent trolls operate. In particular, Segal seems to view the world of patent trolls as a closed lake (with apologizes for the metamorphosis of "trolls") in which defenceless entrepreneurial fish are preyed upon by sharks of various sizes. Under such an approach, the only strategy available for the entrepreneur is "the enemy of my enemy is my friend", under the assumption that the only thing that a patent troll may enjoy more than preying on a defenceless entrepreneur is to best a competing troll for the patent prize.

It seems to me, however, that the better way to understand what took place in the New York Times piece is to view it in terms of shifting marketing dynamics. I spoke several months ago with a veteran of the IP commercialization world in Silicon Valley. She recounted how disheartened she was in encountering twenty-something investors, with or no IP background, who are seeking to create funds of tens of millions of dollars in support of what seems to be straight-up troll-like activity. This is the kind of disconnect between the traditional purpose of patent system to encourage innovation and invention, on the one hand, and the lucrative opportunities to game the litigation system to reap potentially large pay-outs from vulnerable defendants, on the other, that has led to the current furor against not only so-called patent trolls, but the patent system itself.

In the short term (or likely even in John Maynard Keynes famously elusive "long term"), nothing will be done to address the main sources of the inefficiencies in the patent system that have enabled patent trolls to flourish. In particular, I refer to the widespread claims that too many "bad" patents are being granted and later exploited by patent trolls (although the New York Time article does not indicate that the patent at issue was a "lousy" one, but only that Mr. Braxton's business method and system did not infringe). As well, the inefficiencies derive from the crushing cost of funding a defence in a patent litigation action, with virtually no opportunity under U.S. law to receive an award of costs (see my blog post of October 25, 2012 "Patent Litigation Funding: What About the Underfunded Defendant?", here). In such a circumstance, the opportunity to game the patent system to the benefit of the patent troll is clear.

As Arthur Levitt, the former head of the U.S. Securities and Exchange Commission, intimated in a radio interview this week, the opportunity to make millions of dollars on the back of arguably (or palpably) illegal conduct means that illicit behaviour will likely always be part of Wall Street, human nature being what it is. In the case of patent trolls, at least, there is little or no accusation that they are acting in an illegal matter. To the contrary, the story of Mr. Braxton, Smart Options, Mr. Spangenberg and IPNav suggests that at least some of the actors in this world are increasingly behaving like main-stream (at least in a context akin to venture capital) investors. Accordingly an opportunity is identified and an agreement is reached that arguably benefits both parties: the investor and the entrepreneur. True, the latter may be able to dictate the terms, but that is often the case in a garden-variety investment in a start-up. At the end of the day, the deal still has to enable the start-up to achieve its commercial goals for the mutual benefit of the parties.

Seen in this way, Mr. Spangenberg is simply being quicker off the mark in spotting the business opportunity, given his familiarity with the circumstances involved. There is nothing that precludes others for investing in a similar fashion. Not quite David Segal's morality play, but rather a more promising outcome for trying to mitigate the damages caused by the deep-rooted inefficiencies in the patent system.
Posted by Neil Wilkof at 11:15:00