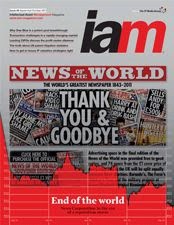 Issue 49 of Intellectual Asset Management (IAM) magazine is now available online and in digital format. According to editor Joff Wild:


"Over the past few weeks the troubles facing News International, the world’s second biggest media organisation, have been widely reported. Allegations centred on the hacking of mobile phones owned by murdered children and dead British servicemen, as well as reports of other potentially illegal activity, have caused a backlash against the company - not just in the United Kingdom, but elsewhere too. As a result, a successful newspaper has been shut down and the News Corp share price has tumbled; senior executives are now under intense scrutiny. In this issue of IAM, we look at the scandal from the reputation management perspective and explain just where News Corp went wrong and how it might begin to recover.

This issue also features two pieces written by senior executives inside IP-owning companies. Ruud Peters, chief IP officer (CIPO) at Philips, explains why he believes the One-Blue patent pool that Philips has helped to create with five partners is such an attractive option; while Joe Sommer, the assistant vice president of AT&T Intellectual Property, explores the challenges facing people such as himself in a rapidly changing IP transactions market.

The recently held IP Business Congress in San Francisco had a strong focus on both CIPOs and value creation. In this issue there is extensive coverage of what was discussed at the event – including a feature detailing what CIPOs think about their departments becoming full profit centres.

Other articles explore a diverse range of subjects, from the ways in which IP performance is reported through recent developments in the US patent litigation market to a high-level discussion of IP valuation among senior members of the Licensing Executives Society USA and Canada. Look out, too, for a report on the findings of a recent survey on what companies in the United States and Europe think about IP insurance. ...".

Email ThisBlogThis!Share to TwitterShare to FacebookShare to Pinterest
Labels: IAM