Collaborative standards for mobile technologies: a great deal for consumers

The IP Finance weblog is delighted to host another guest piece by Keith Mallinson (WiseHarbor) on the issues raised by the inclusion of patented IP within industry standards. Do please let us have your comments: Keith is most willing to deal with them.


"A Great Deal for Consumers in IP

As indicated in my previous IP Finance postings here, here, here and here, mobile technologies, devices, networks and operator services are highly standards-based with essential-IP licensing predominantly and successfully based on a system of (Fair), Reasonable and Non-Discriminatory terms. My articles show extensive competition with significant new market entry, an effective and vibrant innovation ecosystem including Standards Setting Organisations such as 3GPP in mobile communications (including partners ARIB in Japan, ATIS in the US and ETSI in Europe), modest aggregate royalty charges for essential IP compared to product and service expenditures, and declining consumer prices.

Holding out against hold-up theories


IP finance readers encouraged me to submit my first three IP Finance postings to the US Federal Trade Commission in response to its request for information and comments on “the practical and legal issues arising from incorporation of patented technologies in collaborative standards". In particular, the market facts-based analysis submitted in my compendium of articles counters FTC’s allegations of patent “hold-up” in its March 2011 report entitled The Evolving Marketplace: Aligning Patent Notice and Remedies with Competition. In this, it asserts that


... the patentee can use the threat of an injunction to obtain royalties covering not only the market value of the patented invention, but also a portion of the costs that the infringer would incur if it were enjoined and had to switch. This higher royalty based on switching costs is called the “hold-up” value of the patent. Patent hold-up can overcompensate patentees, raise prices to consumers who lose the benefits of competition among technologies, and deter innovation by manufacturers facing the risk of hold-up.

A Director of Standards at one major company wrote to me after reading my first two articles stating I had “done a great job in these two posts dispelling some of the unsubstantiated myths around the use of patents in the standards context”. He went on to write that “the FTC RFI actually asks questions that are clearly and concisely answered by your two blogs (and I suspect your third blog on upstream royalties and downstream benefits will address a couple more)”. He expressed his concern that whereas many academics believe “hold up was a real problem, but those from industry maintained that hold up was a theoretical problem created by academics”.

As part of the FTC’s consultation, it streamed a public workshop it held on 21st June 2011. Divergent views were expressed in vigorous, balanced and exhaustive debate in three panel sessions by representatives from a wide variety of corporate interests on key matters related to the alleged hold-up including IP disclosure, RAND licensing terms and the use of injunctions.Joseph Farrell, the FTC’s Bureau of Economics Director wrapped-up the all-day event with a closing presentation that provided no opportunity for further discussion. He presented the FTC as sole representative for consumers in the debate because consumers are notably absent from the table in SSOs, in licensing discussions and at this workshop. He asserted that suppliers are somewhat indifferent to the alleged hold-up because its costs are simply being passed on in elevated consumer prices.

Significantly, he offered no evidence on the extent to which any cost savings in IP fees would actually be passed on to consumers and provided no indication of consumer harm versus the benefits that accrue to consumers from IP-owners generating a reasonable risk-adjusted return that can be reinvested in further innovation. Instead, he proposed resurrection of the much-criticized Swanson and Baumol ex-ante auctioning approach, in which technology owners would offer their essential IP for inclusion in a standard in “sealed bid” process designed to ensure (the bizarre and unreasonable objective, in my opinion) that the IP price is no more than the incremental value over the price of the next best alternative (even if the latter is priced at zero by a vertically-integrated player seeking to minimise its downstream in-licensing costs).

In addition to numerous problems with that particular method of fixing prices, the evidence is that consumers are actually doing rather well with the efficient status quo in licensing IP. With standards of great complexity and involving hundreds or thousands of patents in mobile communications each covering different portions of each standard, it would be very cumbersome to administer IP auctions and there would be all manner of undesirable consequences. Whereas standards-based technologies are selected in a collective process on the basis of technical merit by a wide assortment of companies who generally negotiate licensing terms on a separate bilateral basis, auctions would constitute collusion among purchasers and would likely unduly emphasise IP price over other important factors (such as functionality, features, performance, and even total system cost and price to consumers). This would be anticompetitive for the same reasons that have prohibited other forms of collective price setting in various SSOs. Substituting the proposed auctions for outlawed collective negotiations neither eliminates nor diminishes the spectre of “monopsony”. Technology selection is a complex process that would be impaired with the rigidities of an auction. IP is most commonly priced on a portfolio basis with essential IP and other patents licensed in a bundle covering the complete implementation of the standard.

Licensees simply do not want to license only the patents covering a small portion of the standard if the licensor owns other patents that cover other parts of the standard; they need and want the entire bundle of essential IP.  The IP price is just one among many factors included in licensing negotiations. Setting standards is not a one-off event; it is an evolutionary process including a succession of numerous incremental additions within standards such as GSM with GPRS and EDGE and within WCDMA with UMTS rev 99, UMTS rev 4, UMTS rev 5 etc to include technologies such as HSPA, and most recently within LTE. Various parties prioritise these factors differently in different bilateral negotiations which enable the most efficient outcomes for all in licensing agreements. In return for cross licenses, vertically-integrated manufacturers are incentivised to under-price for inclusion of their IP in standards, versus upstream licensors, because this would minimize their costs of having to license-in from others. Even Swanson and Baumol have expressed concerns that the opportunistic exploitation of ex post market power “will be magnified if the IP owner is also a participant in the downstream market”.


My previous IP Finance posting also illustrates the battle of business models between upstream licensors and vertically-integrated manufacturers. My analysis measures the financial incentives the latter have to minimise overall IP fees at the expense of the former. Competition between business models is a positive phenomenon that should be encouraged. Regulation to the benefit of one business model over another with royalty rate caps, for example, would stifle competition and innovation.


Minimising prices is not the be all and end all – for corporates or consumers – with other factors (such as features, performance, functionality, flexibility to upgrade services, and support) also very important.  One interesting observation among panellists at the workshop was that, in some cases, would-be licensees would rather sign a royalty-bearing license than commit to other onerous conditions demanded in royalty-free licensing. Whereas consumers typically avoid paying more than single digit percentages over the odds for commodities such as petrol and electricity supply, they frequently choose to pay a significant premium for the most innovative products and brands. For example, Apple’s iPhone has commanded a particularly high wholesale price of around $600 (around double average selling prices for smartphone companies RIM and HTC) and a gross profit margin approaching 60% on the strength of those factors. Typically, the price is heavily subsidised by mobile operators, but consumers pay over the life of their service contracts. Apple’s profits fuel its spectacular innovation machine that has led to entirely new product categories with its iPods, iPhones and iPads in music devices, smartphones and tablets respectively, and that has created the supporting ecosystem with iTunes, its App Store and thousands of developers. Apple’s high margins since introduction of the iPhone in 2007 have attracted plenty of competition, as illustrated in the following section, with “me too” and differentiated products at lower prices for those who are price sensitive. This also exerts downward price pressure on Apple.

The FCC’s fourteenth Annual Commercial Mobile Radio Service (CMRS) Competition Report, published one year ago, ‘examined, for the first time, competition across the entire mobile wireless ecosystem, including an analysis of the “upstream” and “downstream” market segments, such as spectrum, infrastructure, devices, and applications’. The fifteenth report, recently published, “follows the same analytical framework”. In this, it shows how consumer choice in handset devices has increased significantly in recent years. According the FCC’s latest report:

On the important matter of innovation, the FCC goes on to state:

Over the past three years handset manufacturers have introduced a growing number of smartphones with the following features: an HTML browser that allows easy access to the Internet, an operating system that provides a standardized interface and platform for application developers, and a larger screen size than a traditional handset. In contrast to traditional handsets with applications that include voice and messaging, smartphones have more user-friendly interfaces that facilitate access to the Internet and software applications. Ten handset manufacturers offered a total of 144 smartphones in June 2010, compared to 56 in June 2009. [Exhibit 2] lists the top five smartphone and handset manufacturers, by number of models offered, that distributed in the United States in June 2010.

The total number of 230.7 million handsets sold in the year to Q2 2010 is quite remarkable, given a US population of 309 million. Exhibit 3 shows quarterly U.S. handset shipments by manufacturer. With subscriber penetration exceeding 100%, the vast majority of Americans already have a phone. Proven consumer desire to keep trading-up, so frequently and extensively with new and additional devices, flies in the face of arguments that IP prices are causing consumer prices to be excessive and not providing value for money with the costs of technology development. 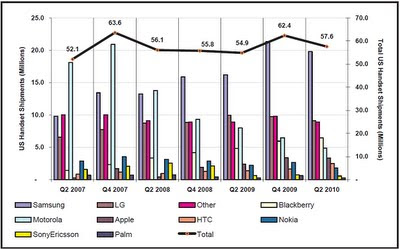 What consumers want and how they are able to get it

As indicated in my previous IP Finance postings, essential IP costs are modest in comparison to the total spent by consumers on mobile communications. However, value derived by consumers from these proprietary technologies is enormous. Whereas technology developers only deserve to reap financial rewards on essential IP technologies that are actually selected and used with commercial success downstream, if and when this occurs, it is quite legitimate that financial returns on these alone should be large enough to cover risks and costs of investing in portfolios of developments. Otherwise, such investments will simply dry up because technologists cannot reliably predict the “winners.” Portfolios will include both technologies that succeed and those that fail technically, are not selected for standardization, or fall short commercially in the marketplace with poor overall demand or in face of competition from alternatives. Competitors with a variety of business models including upstream licensors and vertically-integrated manufacturers generate these returns in different ways, including licensing fees and through profits on product sales. Consumers want improving capabilities, quality and value for money in the devices they buy, and they are willing to pay a fair premium for such value".

Email ThisBlogThis!Share to TwitterShare to FacebookShare to Pinterest
Labels: Standards