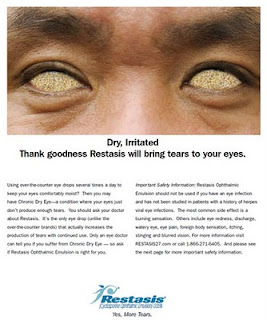 In August 2008 ("Grit in the eye for Allergan? The Restasis licence refuses to go quietly") IP Finance reported on the dispute between Renee L. Kaswan and the University of Georgia over the terms -- and particularly the financial package -- under which Restasis eye drops were to be commercially exploited by Allergan, enabling the latter to make an up-front payment that enabled it to reduce substantially its subsequent commitment to paying royalties. At the time, IP Finance commented:

"The whole episode makes depressing reading. The easy bit is that universities want a fair and reasonable return on their IP; commercial risk-takers like Allergan want the chance to milk the market when they have a winner on their hands, to compensate them for the investment cash wasted on failures; academics want recognition and reward; university administrators want a quiet and stable routine -- and everyone who is part of any decision-making process is entitled to make its decisions on the basis of the best information available both to it and to the other parties at the time negotiations take place.

While it is difficult not to feel sympathy for Dr Kaswan's position, it is equally hard to dismiss entirely the notion that the best market analysis is that which has been enriched by hindsight. We are hardly likely to reach that nirvana in which royalty rates are computed on the basis of a full exchange of all market intelligence between the parties, or fixed and varied by a third party 'wise man'. The best we can do at the moment is either to provide a mechanism for the variation of royalties that is less likely to confer a one-sided advantage than Allergan's pay-off clause, or which enables the rates to be revisited and revised on the occurrence of specified acts or events".

The seven-year dispute has at last been settled by the payment of US$20.2 million, leaving Renee Kaswan free to concentrate on promoting her non-profit organisation IP Advocate. According to her organisation's press release,

"The original licensing deal Dr Kaswan structured for the University of Georgia with Allergan would have netted the university more than $300 million. But Allergan secretly persuaded UGARF to negotiate a buy-down deal behind closed doors, excluding Dr. Kaswan from renegotiations of her patents’ license. UGARF agreed to accept a severely undervalued monetization of its future royalties, drastically affecting the revenue flow to the university, the inventor and the taxpayers of Georgia. In the end, UGARF received $76 million from Allergan in total, while Allergan projects several billion in Restasis revenues.

“What should have been a moment of triumph, for me and for UGA, immediately turned into a legal morass involving frivolous and costly litigation, distracting me from my life’s work,” said Dr. Kaswan. “I want to help create a system in which inventors are protected from this kind of behavior in the future, so they can focus on the research and discoveries that will cure diseases and improve lives.”

There are always "yes buts" for anyone unfamiliar with the situation, however, retrospective analysis was not a factor in this case. Allergan and UGARF went to great lengths to hide their negotions from Kaswan correctly anticipating that she would object to the monetization. Allergan included a $1.5M enticement to UGARF for legal defense. Normative behavior would have allowed UGARF and Kaswan to evaluate their individual incentives for monetization. Most Universities give their inventors the option to participate in a monetization or retain their original license terms for their share of the new deal. Along with the rights conveyed to it by academic inventors, Universities have responsibilities to their inventors to be trusted custodians of their beneficiary interessts in their IP.