Practicalities and Problems in Comparing and Setting FRAND Royalties for SEPs

I was a speaker last week at the Patents in Telecoms & the Internet of Things conference in London. This is an excellent biennial event, organized this year by Professor Sir Robin Jacob of UCL Laws and James Marshall of Taylor Wessing. It focuses on the topic of licensing Standard-essential Patents (SEPs) on Fair, Reasonable and Non-Discriminatory terms. I was on a panel among economists Jorge Padilla, Avantika Chowdbury, Tim Pohlman and Mark Schankerman in one of two sessions on FRAND Determination Methodologies: Principles, procedures and problems. The other session focused on comparable licenses. Our session also considered top-down and value-based methods as well as the economics in bargaining agreements. 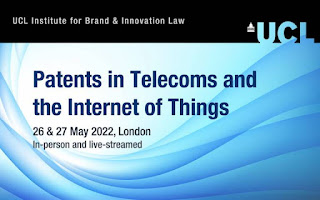 I have received some requests from conference attendees asking for my panel session talking points. I am posting these here for access by all. My spoken remarks were slightly different, so as not to duplicate what had been said earlier at the event and to save some time. I have added several hyperlinks —mostly to articles of mine—to provide support to some of my assertions.

Value of SEPs in a large ecosystem downstream

Patented intellectual property in products and services such as cellular is clearly very valuable. In an ecosystem that is only 40 years old for voice services, 30 years old for text messaging and just 25 years old for Internet services, more than 6 billion of the world’s 8 billion population have a mobile phone. There are now more cellular connections than there are people on the planet. For most of these people their mobile phone is their primary or only means of calling or accessing the Internet for communications, information, entertainment and commerce.

According to a new report prepared by Kearney for the GSM Association of mobile operators, the Internet value chain was worth $ 6.7 trillion in 2020, with 28% of that value through connectivity services and devices and the vast majority of that in cellular.

Notwithstanding all that, a big question for us here today is what proportion of that value is attributable to cellular SEPs, as distinct from other SEPs and other forms of intellectual property. What are fair shares of value vertically down the supply chain from SEP owners to implementers in device manufacturing and further downstream. And, in the case of SEPs, what are fair and non-discriminatory charges horizontally among different patent owners and licensees?

Some technology standards such as Bluetooth, USB and DOCSIS for cable modems are largely licensed royalty-free by mutual consent among most patent owners. With no patent fees, the only opportunity to monetize intellectual property  is downstream, for example, by implementation along with others’ IP in products.

In the case of video standards such as AVC/H.264 the vast majority of SEPs are monetized through patent pooling. This voluntary private solution with licensing costing no more than around 20 cents per device divides royalties among patent owners, most of whom are also implementers.

In the special case of cellular, SEP owners justifiably seek rather higher royalties, in partial compensation for multi-billion dollar annual R&D investments for innovation and standards development, for example, by the likes of Ericsson, Nokia and Qualcomm at around $5 billion apiece annually. These fees are charged at the handset level at an average aggregate of approximately $10, which is 4% of the $250 average wholesale selling price for mobile phones.

In my previous presentation at this conference series— in Tokyo at the end of 2019— I showed that the economic value added of cellular connectivity, after incremental product costs, in a 4G smartphone was more than 20 times higher than that aggregate royalty rate percentage of 4%. I showed the example of an iPhone model that was priced by Apple at an additional $250 over that for a $200 iPod Touch with near identical functionality apart from the cellular capability costing $32 in manufacture. I also emphasized the significance of this beyond price setting by Apple in what economists call consumers’ “revealed preferences” with 12 times the volume and 46 times the value in sales of iPhones over all iPods.

While there is no cellular SEP licensing further downstream, SEP technologies also generate value in the extended ecosystem of Internet services and beyond including externalities (e.g. human health and safety).

Cellular SEP licensing in mobile phones is almost entirely bilateral among parties with various business models in developing standard-essential technologies and implementing them in devices.  Companies like Qualcomm and InterDigital are more dependent on out-licensing to generate revenue than are vertically-integrated SEP owners like Samsung that is more interested in protecting its downstream handset business with cross-licensing, and in minimizing licensing out-payments for its leading market share of handset sales.

Licensing cellular SEPs is a complex matter given all the above and with FRAND commitments.

So now to the heart of the matter: including practicalities and problems with techniques employed in comparing and setting royalties.

There are various ways of: 1. Defining royalty prices and 2. Determining levels for these.

Pricing royalties can be ad valorem – i.e. a percentage of the device cost, or in dollars-per-unit charges, or with a hybrid of the two including dollar floors and caps. Lump sum prepayments are also common. Making comparisons among all these can be tricky and can be presented to give various impressions.

We tend to refer to percentage rates when, for example, talking about aggregate royalties.

Effective royalty rates paid (what I call royalty yields) including aggregate figures have fallen as royalty caps have been exceeded with increasing handset average selling prices as smartphone sales have surged since the mid-2000s.

These are seemingly ideal if they are well established with years of substantial licensed sales volumes and royalty payments. But we can have a chicken and egg problem with new standards such as 5G and some agreements have too little trading associated with them, or are associated with side deals and other actions that make them of dubious applicability.  In my experience with litigation, parties usually differ on which licenses are suitable comps. Some licensees object to use of agreements that were signed under the threat of alleged "patent hold-up". Comparing percentage rates with capped, dollar-per-unit or lump sum figures in different agreements is tricky.

Cross-licenses need to be unpacked to derive one-way rates, which is also problematic including because unpacking calculations tend to use SEP counts that are subject to similar shortcomings as where patent counts are used in top-down methods.

Implementers with small numbers of SEPs can have disproportionately strong leverage against major vertically integrated players with both large SEP portfolios and large downstream businesses to protect from patent infringement claims. Unpacking these cross-licenses underrates the major party.

These methods are in accordance with patent law and are commonly used where few patents are involved. They seek to measure and apportion economic value. Techniques can include use of hedonic pricing models and consumer preference measurements with conjoint analysis.  I’ve used such techniques as a testifying expert witness in a non-SEP case and in cartel price-fixing litigation.

But judges seem less inclined to consider such methods in FRAND cases where they have misplaced concerns about alleged and unproven patent hold-up and royalty stacking, because they now have the crutch of top-down valuation methods to use in addition to comparable licenses. For example, in the TCL v. Ericsson Decision (which as unanimously and entirely vacated on appeal), Judge Selna threw out an Ericsson expert’s so called “Ex-Standard” valuation approach for lacking fundamental credibility and because the judge thought it suggestive of royalty stacking, even though the judge agreed that TCL did not challenge the methodology, but rather the inputs to the calculations.

I believe that value-based methods should be increasingly employed — not disregarded.  Imperfect though they all are, various different techniques should be explored to figure out where and how much real economic value is generated, and to set royalties accordingly.