The World Trade Organization’s Trade-Related Aspects of Intellectual Property Rights (TRIPS) Agreement forced much of the developing world to adopt minimal standards for intellectual property (IP) protection. The imposition of such standards has been subject to much criticism. NGOs and advocates of international development have raised serious concerns about TRIPS, TRIPS Plus (which expands existing obligations under TRIPS), and the increasing use of bilateral trade agreements to expand IP protection.

Critics of such agreements cite the costs associated with enacting IP legislation and that, due to global IP protection, imitation as a development strategy has been ruled out. These concerns can neither be denied, nor is it the aim of this article to dismantle them.  They are certainly important problems that deserve to be further studied.

However, preliminary insights in the patent positions in technologies relating to tobacco harm reduction suggests that out of 74 000 patents published on technologies aiming to reduce the harm of smoking, hardly any cover the developing world.

With the exception of South Africa, the typical African country has not seen any significant patent filings in this technology.

Figure 1: Indications of patents relating to vaping over the last decade 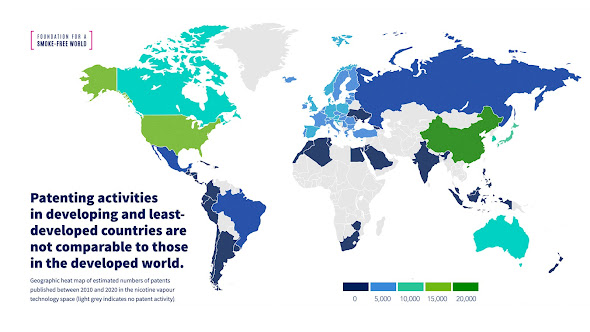 Many developing countries have struggled setting up functioning patent offices, finding qualified staff, training judges in IP and developing local IP professionals. in some countries patent offices may have been established without the necessary infrastructure or human capacity to successfully examine patent applications. IP legislation has been enacted without investing in the necessary infrastructure to turn legal theory into legal practice. None of this may have been undertaken in bad faith or to wilfully breach a commitment to international trade.

Rather, the sad reality is that in many developing countries there is very little understanding about IP and its economic impact. Even at the European level, the qualifying exam for European patent attorneys is more successfully passed by Brits or Germans, rather than their colleagues from less-privileged countries. Greece, for example, has up until now not succeeded in developing patent attorneys and the job is undertaken by lawyers.

Lack of know-how and know-why, are probably the primary reasons many developing countries are still grappling with the IP system. Leading IP economies have often been less than understanding about the constraints facing developing nations. The Office of the US Trade Representative for example releases annually a special report on IP and review of notorious markets for counterfeiting and piracy.

International development aid for IP has been rather scattered. The World Intellectual Property Organization (WIPO) followed the United States Agency for International Development (USAID) offer the most important support for IP-related development assistance. However, at the international level technical assistance can often be neither coordinated nor continuous. With the exception of WIPO, such assistance may also have a tendency to reflect the specific requirements of the bilateral donor country, rather than focus on the larger needs of a developing country or an entire region.

All of this has led to the current sorry state of global IP law. While some nations are at the forefront of defining the technology law of the future, others are still confronted with a situation where ordinary people have probably not even heard of intellectual property.

The initial analysis in the tobacco space was a harsh awakening as to how at least one sector of the economy assesses the value proposition of developing countries’ IP systems. Tobacco companies are waging trans-jurisdictional patent battles over next-generation tobacco products, but at the same time their focus on developing country IP is minimal.

This is at odds with the market reality. Over 85% of smokers live in developing countries, yet the patent focus remains on developed nations. The market potential for tobacco harm-reducing products in developing nations is substantial, if these products were to be made available globally, rather than to consumers in developed countries only. This would not only expand business opportunities for the tobacco industry, but would also offer people around the globe less harmful ways to consume tobacco. A potential “win-win” situation is being hampered by a deplorable implementation of the patent system in many countries.

I do not want to be misunderstood as a hard-core advocate of the patent system. However, the initial patent landscape analysis made me wonder if in the 21st century any nation can truly afford to stay outside of that system. The reality is that, doing so, translates into marginalization. This segregation may be so pronounced that companies may not be motivated to invest in patents in these countries. Usually, this also means that they have no intention of selling patented products in these countries, leading to restricted consumer choice and limited take-off of technology. Whether this is indeed a better development choice should be a subject of further discussion.

Disclosure of Conflict of Interest: OxFirst has been compensated by the Foundation for a Smoke-Free World, the views are the author’s own. The preliminary patent landscape report is available here and here.