What was Jared Fogle worth as the Subway Guy? 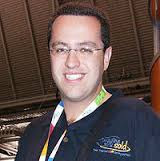 IP valuation tends to operate in the area bounded primarily by patents and secondarily by trade marks and copyright. The ways of IP evaluation are several, which sometimes leads skeptics to question how accurate any such valuation can ever be. One need only recall the 4.5 billion dollar valuation given to the Kodak patent portfolio in 2011, only to see that when all of the dust settled in the face of the company’s business meltdown, the portfolio fetched only slightly more than 500 million dollars. When trade marks and copyright are involved, the valuation that can be ascribed to a portfolio of trade marks and even to a back library of rights in films is even more murky.

The challenges of carrying out IP valuation occurred to this blogger as he read the account of the rise and apparent fall of Jared Fogle, the iconic (at least in the US) pitchman for Subway, the franchise restaurant operation. Fogle is the once-anonymous obese college student from Indiana, who reportedly once weighed nearly 450 pounds, but who then proceeded to lose 245 pounds in a single year, centring on his claimed healthy use of Subway food offerings, thereby giving meaning to the notion of the “Subway diet”. An ad agency in Chicago leveraged Fogle’s story as the basis for advertisements on behalf of Subway. One thing led to another, and Fogle found himself as the chief pitchman for the company,becoming known as the Subway Guy, travelling all around the world on behalf of the company in support of maintaining a healthy life style based on Subway food offerings. In 2004, he established the Jared Foundation in support of efforts to combat child obesity. Fogle had become a renowned media figure in his own right.

All of that seems to have come tumbled down upon him this week, at least with respect to Subway. A couple of months ago, the executive director at the Jared Foundation became involved in a scandal relating to child pornography. Fogle was not implicated. However, this week it was reported that officials and agents, led by Indiana's Internet Crimes Against Children Task Force, carried out a raid on Fogle’s home in suburban Indianapolis, during which they seized computers, various media storage devices and documents. It does not appear that Fogle has been charged with a crime and he is reported to be cooperating with the authorities. Nevertheless, the next day, Subway and Fogle parted ways, the upshot being that Fogle is no longer connected with the company.

Let’s be clear about the human side of this saga—this blogger wishes Fogle no ill and we draw no conclusions in this regard. The story did, however, give rise to the question: how much were Fogle’s efforts worth to Subway, at least until this week? The Wikipedia entry on Fogle states that, between one-third and a half of the growth in sales of the overall franchise operations since 2000 (the company is reported to have grown three-fold during that period) is attributed to Fogle’s promotional efforts. While no official company figures were given, an article on Bloomberg.com pointed to one estimate that, in the US alone for 2014, sales reached nearly 12 billion dollars. Against this, Fogle is reported in Wikipedia as being worth 15 million dollars.

And so the question: how does one place a value on Fogle’s efforts in connection with Subway, prior to Tuesday of the week? Start with the estimate, as reported above, that his efforts were responsible for perhaps up to one-half of the growth in sales of the company since 2000. How does one go about creating a metric to establish this conclusion? In his younger days, this blogger engaged actively in social science research, where multivariate analysis was central in trying to disentangle the extent to which each of the variables independently contributed to the dependent variable under scrutiny. Is something like this being used to reach the conclusion about Fogle’s contribution to the sales growth of the company; if not, what was used to reach this result?

Moreover, assuming that Fogle’s contribution to the growth of the company can be quantified, how should this contribution be valued, and how should Fogle then be compensated? This blogger does not have any ready answers. Valuing patents is challenging enough, but valuing the worth of a media pitchman behalf of a company and then compensating him or her accordingly seems an even more daunting task.
Posted by Neil Wilkof at 15:06:00