The branding challenge when Aerosmith meets cup of joe 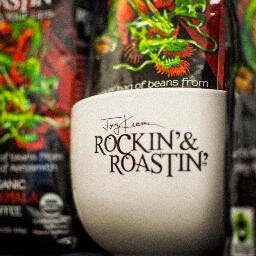 Entertainers, musicians and other public personalities have usually found it to be tough going when they try to promote products under their name and personality. Not everyone can enjoy the commercial success of the Olson twins, Mary-Kate and Ashley, here. More typical are the failures that have befallen most celebrities who have attempted to market themselves through consumer products. But hope springs eternal-- witness the venture being championed by Joey Kramer, here, the legendary drummer of one of the most successful musical bands of all time, Aerosmith, here. No, Kramer has not sought to launch a new line of casual wear or perfume. That would be so “not Aerosmith”. Instead, he has launched a coffee—called “Rockin’ and Roastin'”. Not any old coffee, mind you. In the words of the company website, here, “Rockin’ and Roastin’" is mean to be “some of the finest, purest kick-ass coffee on the planet comprised of organic, custom-roasted Arabica brews in three varieties sure to please the palate of any “coffee-sseur.”

In a recent broadcast on Bloomberg radio (also available as a Bloomberg podcast), Kramer described his efforts to further the “Rockin’ and Roastin’" brand coffee. As summarized by blabbermouth.net, here:

“The story of Joey Kramer's Rockin' & Roastin' organic, custom-roasted coffee blends begins in the field. Unlike "sun grown" coffee that's cheaper to produce but requires chemical fertilizers and pesticides and leads to the destruction of native rainforests, Rockin' & Roastin' coffee is lovingly cultivated using the traditional "shade grown" method, under a canopy of indigenous trees. This sustainable practice supports a wide diversity of plant and animal life, provides food and shelter to migrating birds, and helps to filter carbon dioxide from the air, reducing the danger of global warming. There is currently a trio of international blends offered: two Dark roasts, from Sumatra and Ethiopia; and, a Dark-Medium, hailing from Guatemala.”

Having regard to the summary of this interview (and listening once again to some vintage Aerosmith music as well), I could not help but ask this question: what exactly is the branding message being sent by "Rockin’ and Roastin’" coffee? For this blogger, there are at least four distinct branding messages being conveyed.

1. The “edgy” message—First and foremost, the coffee is an extension the edgy image that Aerosmith has developed over the years. Kramer has chosen not to use his own name in branding the product. Nevertheless, as can be seen from an inspection of the company’s website, Kramer is aggressively identifying himself (and by extension the band itself) with the coffee, both by name and picture. Calling coffee “kick-ass” may convey little about coffee per se, but it certainly conjures the public view of the group (not by accident were they called “the Bad Boys from Boston”). Moreover, Kramer made it clear that there would be no decaffeinated option (“you may as well drink tea”). Given all of this, calling the coffee product “Rockin' and Roastin’" seems almost pre-ordained.

2. The “quality product” message—The coffee is not just about Kramer and Aerosmith; it is about the coffee itself. Kramer went to great length in his interview to proclaim his passion for coffee and his hands-on approach to every facet of the sourcing, selection, manufacture and distribution of the product. Coffee from Sumatra, Ethiopia and Guatemala are not selected because they are “exotic” locations but rather because they are world-beating coffee beans. At the end of the day, you will drink "Rockin’ and Roastin’" coffee because it tastes better than its competition. As Kramer said:


"The problem is in order to build a brand, you've got to be pretty much hands-on and you've got to be able to do the work yourself and not be afraid of it. I'm the CEO of this company, it's my baby; I'm not just another one of those celebrities that's putting my name on something and expecting to make millions of dollars off it. I'm into the coffee in the same way my band is into the music; you know, we're into it because it's about the music and I'm into this because it's about the coffee. I'm the CEO, I cup the coffee myself, the beans are roasted to my specs, I'm hands-on all the time."

3. The “socially conscious” message—By purchasing "Rockin’ and Roastin’" coffee, you are also making a social statement. The “shade grown” method for growing the coffee beans is good for the forest, the larger ecosystem and reducing carbon dioxide emissions. Go ahead and indulge yourself, not merely for the quality of the product but also for the collateral social benefits connected with it. As such, "Rockin' and Roastin'" is a win-win situation for all concerned.

4. The coffee is “organic”-- While Kramer and Aerosmith may connote ”edgy”, the "‘Rockin’ and Roastin’" product is also presented as organic. Thus, in the interview, he made an emphatic point that, at least in some of the chain stores carrying the coffee, the product is not found in the “coffee” section, but rather in the “organic foods” section (whatever exactly that means). As such, for a customer to make a purchase, he or she must be aware that the coffee product is found in the organic section. "Rockin’ and Roastin’" is not alone in this approach and traditional food brands are struggling a bit to keep the attention of their customers against challenges such as this, here. How far this approach of positioning "Rockin' and Roastin'" as an organic coffee will take Kramer remains an open question.