Here's IP Finance's latest guest post from Keith Mallinson (WiseHarbor). Here he brings us up to date on the prospects for closure in an investigation which many people feel should not have been started in the first place. Keith writes:

According to Bloomberg press reporting, the European Union’s competition chief said he is hoping to close probes into whether Samsung Electronics and Google’s Motorola Mobility breached European antitrust rules by seeking injunctions for infringement of key mobile-phone patents in their struggle for supremacy with Apple. Competition Commissioner Joaquin Almunia has recently said that the European Commission’s approach on standard-essential patents will be “clarified” in two separate cases concerning these companies.

Allegedly, it’s a hold up!

Yet the case for competition authority intervention lacks adequate support. Key issues under consideration by DG Comp include whether these defendant companies have the possibility to “hold-up” standards if they seek, obtain or even threaten injunctions for the infringement of standard-essential patents, and are thereby able extract unreasonable royalties. As Commissioner Almunia said in 2012,

“[B]ecause to build a modern smartphone one needs thousands of standard-essential patents, their holders often have considerable market power. Any company that holds these patents can effectively hold up the entire industry with the threat of banning the products of competitors from the market. This sort of hold-up is not acceptable”.

The qualifiers possibility and threaten are most significant here because there is so little evidence of hold-up, with abundant indications to the contrary, and because injunctions involving standard-essential patents are so rarely granted and are invariably short-lived. In the recent case with Microsoft pursuing claims of hold-up against Motorola in the Western District of Washington, even Microsoft’s experts Kevin Murphy, Timothy Simcoe, Matthew Lynde conceded under cross-examination that hold-up was not necessarily a problem. Instead they stated there was no evidence of hold-up and could not identify a single license that had been held up. Similarly, in a U.S. International Trade Commission investigation, Michael Walker who was until recently ETSI’s Chairman, testified that patent hold-up has never been a problem at ETSI and that no standards have been blocked by SEPs.

The attention of competition authorities has been drawn to the smartphone “patent wars” because the players are large, very vocal, deep-pocketed, have disparate positions with respect to SEPs and are most litigious. Those who are crying foul and seeking antitrust remedies include companies commanding some of the highest profit margins and largest cash piles in the ICT sector. Patent infringement litigation is predominantly among the above smartphone market leaders Apple, Samsung and it also includes some other industry heavyweights – most notably Microsoft and Google’s Motorola. These players are all jockeying for position in the large and severely disrupted smartphone marketplace. This is illustrated by the market entry of Apple with its highly-successful iPhone models since 2007 at the expense of Nokia and BlackBerry in particular, with their rapid demise from smartphone market leadership to fighting for survival since 2009. 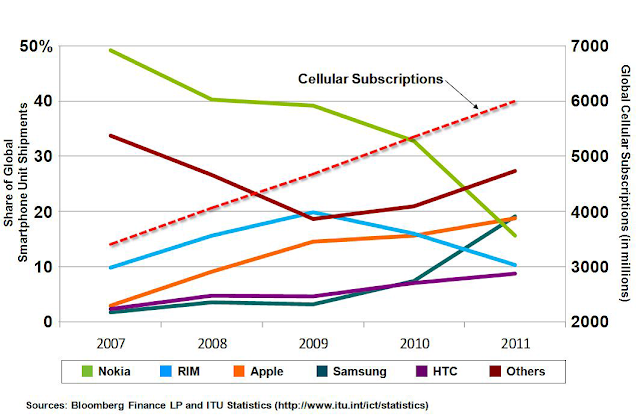 Even Commissioner Almunia’s spokesperson, Antoine Colombani, remarked in March of this year that

“[t]he markets for smartphones and tablets are very dynamic, innovative and fast-growing. Samsung's growing market position and the success of Google's Android platform are good reasons to believe that competition is strong on these markets.”

Changing rules of the game for SEP licensing would be a major step and, given the success of the mobile communications market, completely unwarranted. It would significantly affect the relative competitive positions of many market players. Business models and IP assets differ enormously between old-guard phone manufacturers owning many mobile technology SEPs, and new entrants having to build their stocks of these from scratch while already owning rich troves of other IP, in many cases. Nokia fell to only a few percent smartphone market share despite its multi-billion Euro annual R&D investments over many years building market-leading accumulations of SEPs.

Injunctions are fundamental to patent law, and are purposely not precluded in the intellectual property rights policies agreed by consensus or majority voting in standard-setting organisations such as ETSI and in SEP licensing agreements. Eliminating or restricting further the possibilities for seeking injunctions (for example under the threat of antitrust sanctions) would have major adverse consequences. For example, in the absence of being able to seek injunctive relief, a potential licensee might see little downside in simply waiting to see if a court eventually awards “reasonable royalty” damages, instead of agreeing to pay these with certainty at the outset. With no possibility of injunctions, “ reverse hold-up” could occur, with patentees unable to receive adequate compensation for their innovation investments.

"sanctions available to address patent hold-up and related concerns under other legal regimes are more than adequate to provide optimal deterrence against patent hold-up."

Injunctions are far from being automatic entitlements and are only ever granted, if at all, for SEPs after extensive deliberations in court. In the U.S., decisions by the courts and the International Trade Commission show that judges have the ability to determine whether or not injunctions or import Exclusion Orders are warranted. And Exclusion Orders can be vetoed by the President of the United States, as recently occurred when an import ban instigated by Samsung against Apple was overturned. In the EU there have been only a few SEP-related injunctions granted, and product bans have had little impact on the market or consumers.

Evidence indicates that competition authority interventions are unwarranted and could be very harmful. Apple, for example, has achieved rapid market share growth and stellar gross profit margins of up to 60% on the iPhone while relying overwhelmingly on others’ SEPs. It is far from certain that any antitrust intervention-induced SEP cost reductions for manufacturers would necessarily be passed on to consumers. But limiting innovators’ ability to derive licensing income and other value from SEPs would deter R&D investment, participation in SSOs and contributions to standards. Under the existing system, consumers have not been harmed, they have benefited from exceptional improvements in product performance, while the numbers of suppliers and products have expanded substantially. Quality-adjusted consumer prices have reduced significantly and continue to do so.

Time out on intervention

Time is running out for Joaquin Almunia who is coming towards the end of his term as Competition Commissioner. He is therefore eager to close the Samsung and Motorola cases before departure. Recent comments, as reported by Bloomberg; that decisions “not only depend on the Commission side” seem to indicate he is seeking a voluntary remedy with agreement from Samsung and Motorola (or a Commitment Decision under Article 9 of the EU’s antitrust regulation). With such poor evidence of hold-up or consumer harm, it is unsurprising he prefers to pressure the defendants into such a settlement than go for a full negative decision that could be appealed by these defendants. This is because a Commitment Decision is “voluntary” and does not require the EC to establish that the company has “market power”, nor that it abused such power. On the other hand, a full negative decision would require the EC to establish its theory of harm under scrutiny of the courts, which would appear appropriate given that Commissioner Almunia aims to provide “clarity”. However, despite investigating the issue of SEP licensing on the basis of Fair Reasonable and Non-Discriminatory terms for almost a decade, DG Comp has not yet had the confidence (or, some would say, the legal basis) to issue a full decision. That stance seems unlikely to change right now and there are real questions that the EC has to answer about why it is taking this aggressive position and how it believes its actions will encourage, rather than jeopardise, the great work and accomplishments of SSOs and their members.