Modu was a small Israeli telecommunications company which attempted an IPO on the Tel Aviv stock exchange (see report here) but collapsed a few days later when the IPO failed, apparently USD 130 million (according to the report here). The 2008 investment round placed a valuation of USD 150 million on the company.

Modu made tiny little handsets which were no bigger than a credit card. Not much use either without a keyboard, but they were designed to be fitted out with jackets to add the functionality. Well it appears that the lack of a keyboard was their downfall since the company went out of business. 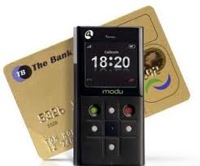 And their biggest asset left? Well apparently the patent portfolio, as Google came in at the last minute to pick up around 100 patents for a price of USD 4.9 Million. Quite a price for a bunch of patents - but probably only the cost of one saved litigation if the patents ended up in the wrong hands. I've no idea how many litigations Google have pending related to their Android-based telephones. It's probably into the tens and it would not surprise me if the fees were beginning to have an impact on the bottom line of the company. Google has never been a particularly aggressive company in asserting its patent rights and so these IP rights will probably end up in a dusty box somewhere in a lawyer's office (or since it's Google out in the big wide cloud) until the opportunity comes to defend itself.