Keeping in STEP with intangible assets? 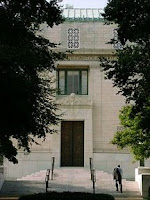 On 23 June 2008 the National Academies' Board on Science, Technology and Economic Policy (STEP), in cooperation with the Committee on National Statistics, holds a one-day conference in Washington DC on Intangible Assets: Measuring and Enhancing Their Contribution to Corporate Value and Economic Growth (programme details here). According to information received together with the announcement of this event,

"Investment in intangibles, according to a 2006 Federal Reserve Board staff analysis, exceeds all investment in tangible property and, if properly accounted for, would raise US productivity growth by 20 percent for the period 1973-1995. These assets -- computer software, R&D, intellectual property, workforce training, brand equity and organizational capabilities -- now account for three quarters of economic activity. Increasingly, they are a principal driver of the competitiveness of US-based firms, economic growth, and opportunities for American workers. Some intangibles, like intellectual property, are being securitized, auctioned, and traded; a few years ago no one contemplated the existence, let alone the extent, of such "technology markets."

Yet despite these developments many intangible assets are not reported and are treated in the national economic accounts as expenses rather than investments. And there is no coordinated national strategy for promoting intangible investments apart, perhaps, from R&D.Sponsored by the Commerce Department's Bureau of Economic Analysis in response to a congressional directive, the agenda includes discussions of

Email ThisBlogThis!Share to TwitterShare to FacebookShare to Pinterest
Labels: Events