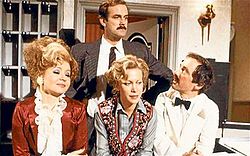 This blogger has happy memories as a teenager of family TV viewing of the BBC comedy series Fawlty Towers. Even today his generation will often - generally after a few beers - recall hilarious moments and catch phrases ("I can speak English. I learn it from a book") from the show. Even his children love the show as its humour is timeless. So it's not surprising that an Australian-based dinner show Faulty Towers is, according to the Australian Sydney Morning Herald, a great hit with tickets costing up to AUD 159. A UK run in the summer will see tickets of GBP 59. John Cleese has tweeted that he is amazed about the profits being made from the show, which has been running for a number of years.

Cleese seems to be looking for a licensing deal as he's added that there is nothing wrong with the show. The question is - how strong is his licensing rights? The formats of TV shows are notoriously difficult to protect with different courts in different countries seemingly coming to different conclusions (the seminal case in the UK concerns the entertainer Hughie Green who attempts to stop TV New Zealand exploiting his "Opportunity Knocks" format - noted here). At least some courts have argued that they are "ideas" and not protected by copyright law. On the other hand some of the catch phrases at least might be protected under copyright law and certainly the names of the characters might have an element of originality. The strongest rights tend to come under trade mark law and there is - at least in this author's view - a degree of similarity between "faulty towers" and "faulty towers".  Rather surprisingly this author could find only a trade mark registration in the UK data from 1996 and a more recent 2015 international registration, which apparently only covers the Republic of Ireland. So it looks as if the case for a trade mark infringement could be weak. There's also an interesting question about whether any rights could still be asserted as  the Australian attempt to register their own trade mark in the UK dates back to 2010 when it was withdrawn because of an opposition.

So - will Mr Cleese be successful? The Australian company have responded robustly online and the IP rights situation may not be particularly favourable to any assertion of rights to license the format. The international success of the formats Idol, Got Talent, Bake Off, Master Chef, etc. show just valuable internationalisation of TV formats can be. Back in the seventies, when Fawlty Towers was first broadcast, the BBC probably only considered selling the show onto its partner public broadcasting networks in the Commonwealth. Today shows are international. And this blogger has even discussed Fawlty Towers with a Norwegian friend of his who seemed to know the plots better than he did.
Unknown at 03:40:00
Share