Latest on the Nortel bidding war

The deadline for submitting bids for the Nortel patent portfolio is clearly drawing near and "informed" leaks are appearing. Presumably intentionally to drive up the price. The latest leak is reported on the fierce wireless website and lists Apple, Google as well as the Chinese companies Huawei and ZTE as potential bidders. Nothing surprising there. The Nortel portfolio includes a number of gems which any company operating in the wireless space would love to have - if only to act as a bargaining chip in licensing and negotiating deals. Neither Apple nor Google have an extensive telecoms patent portfolio and so they would love to build the portfolio. Huawei and ZTE are starting to build massive portfolios, apparently subsidized by the Chinese government. Indeed Huawei is now one of the bigger PCT patent filers and ZTE claims to hold 10% of the essential LTE related patents. However, whilst they have many pending patents, their granted portfolio is much smaller.

Intriguingly two consortia including patent licensing firms are also in the running. One consortium apparently consists of Intellectual Ventures and InterDigital. IV is known for its accumulation of patents, whilst InterDigital possesses several patents that are relevant to mobile telecommunications standards (but has also lost some court disputes). The other consortium includes RPX - a patent aggregator that acts on behalf of several major companies to take patents "out of the market". RPX is currently planning its IPO as reported here and here. Will it be using some of the proceeds to purchase the Nortel portfolio.

These two consortia could clearly push the price of the portfolio up tremendously. Neither has much interest in cross-licensing since they do not actually make any products as such. RPX is aiming to buy up problematic patents to support their membership base (as explained here). No doubt having a ripe bag of telecoms patents will "encourage" a few more companies to sign up and help the IPO on its way. IV has until recently not been known for enforcement of its patent rights, whereas InterDigital has been active. So it will be interesting to see how that works out if they win the pot of gold. Both companies will have an interest in "monetarising" their new assets.

The sheer sums of money here are just mind-boggling. The size of the mobile telecommunications market is clearly massive, but it is also going to take a major investment for any company to justify the figures that are being talked about. It will not be unnoticed that none of the established players such as Nokia, Ericsson or Alcatel figure among the potential acquirers. They all have substantial portfolios of relevant patents - but then Nokia is known to be a backer of RPX and Ericsson purchased the LTE assets of Nortel some months ago and presumably got a license to the relevant IP thrown in with the deal. So they don't need the rights. Has this all been factored in? The IAM blog was sceptical about whether the bond purchasers who have pushed up the value of the Nortel bonds really understood the process.

Let's hope nobody has to see his car because of his Nortel patent portoflio. 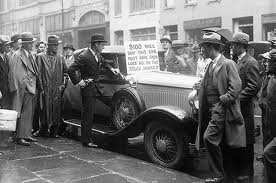